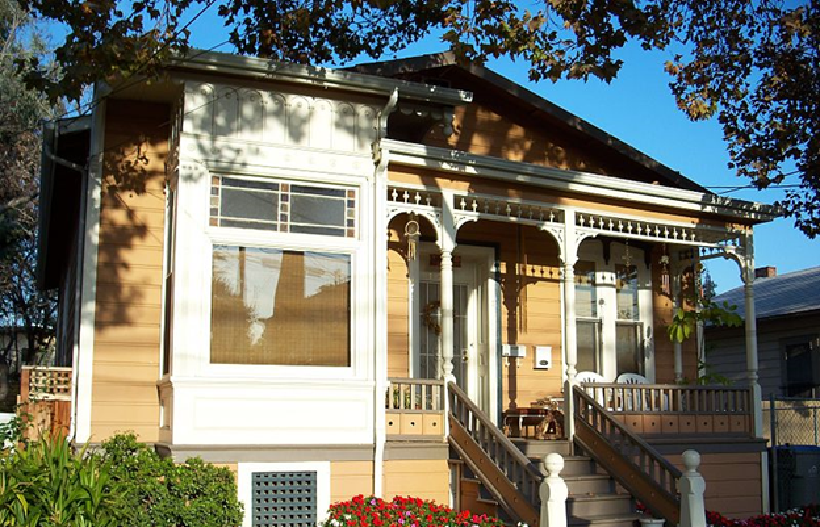 In a recent memo, Mayor Liccardo proposed a new program that would offer forgivable loans and waive fees for San Jose property owners that build in-law units, also referred to as accessory dwelling units or ADUs. Property owners would be eligible for the incentives if they rent to low-income renters for at least five years. City Council members Sylvia Arenas, Magdalena Carrasco, and Pam Foley co-signed the memo.

“We need to disrupt the market to find a more innovative way of getting housing built in our very expensive city,” said Liccardo. The mayor was speaking at a news conference at Advantage Homes, a San Jose builder that makes prefabricated in-law units.

A total of $5 million would be dedicated to the program, according to the memo. And a housing partner such as the Housing Trust Silicon Valley would manage it.

Residents could get up to $20,000 to cover permit fees and construction costs. And a portion of the loan would be forgiven on an annual basis in exchange for five years of rent restrictions.

San Jose has struggled in its attempt to reach affordable housing goals. Several years ago, the mayor presented a goal to build 25,000 new homes by 2022, of which 10,000 would be affordable for low-income residents. But the city is already falling behind in reaching this goal.

San Jose plans to dedicated $100 million to a dozen affordable housing projects to help reach its housing goals. The plan will add more than 1,000 new housing units across the city in the next few years. But last year, voters rejected a housing bond that would have earmarked more funding to address the city’s housing crisis.

The San Jose City Council could review the mayor’s memo as early as this June. However, it could take months before the program is up and running if it’s approved.

Liccardo says he sees “untapped potential” in San Jose’s sprawling neighborhoods to add more housing to the area. However, construction costs, city fees, and other related economic hurdles are getting in the way of homeowners adding in-laws units.

A Gap in Financing

Vianey Nava, manager for the ADU program at Housing Trust Silicon Valley, said one of the big challenges to building more ADUs is that there’s a “a gap” in getting financing. In San Jose, about 120,000 homeowners are eligible to build ADUs on their property. But last year few were completed, she said.

Nava believes the mayor’s proposed incentives will help many homeowners bridge the financing gap, which will help to spur development. In 2018, San Jose relaxed certain building restrictions on ADUs, such as reducing lot size requirements and allowing two-bedroom units. This caused interest to increase, Nava said.

“All these small things, they’re all tying together. Now people feel a little bit more confident about investing in the process.”

Affordable Housing for Family, Friends, and Others

Also referred to as “granny flats,” ADUs have traditionally been used to house aging parents or grandparents, or in-laws, as the other name for these units implies. Yet Nava says they’re increasingly being occupied by “boomerang” children who move back home because of California’s high housing costs, or other family members and friends who want their own place to live, but not too far away.

Carl Guardino, head of the Silicon Valley Leadership Group, a public policy association in Silicon Valley, said he has an ADU on his property that he rents to a young couple who are “trying to afford the Bay Area.” And before that, his in-law rented by an elderly woman lived in the unit before she moved into an assisted living facility.

“I think we’re going to see much greater interest in San Jose and beyond for a thoughtful ADU effort than we might even imagine,” Guardino said. “People are concerned about the crisis and they’re looking for a new approach to helping solve the crisis. And accessory dwelling units are going to be part of that solution if we do it in a thoughtful, coordinated way.”

Rick Schertle, a teacher in San Jose, is in the process of converting his garage into an ADU. Schertle says he bought his home in the late ‘90s when it was still possible to get an affordable mortgage on a teacher’s salary.

He says part of the reason he’s building his in-law unit is to give back. He wants to help other teachers live in the community where they teach vs. having to move out to the Central Valley or somewhere else that’s affordable. “I want to build this for her,” Schertle said, “to be able to bless somebody like a teacher or someone in the service industry.”

But Schertle admits the fees to build his in-law unit were daunting – in the thousands of dollars. “It’s pretty intimidating,” he said, adding that a forgivable loan sounds “really appealing.”

Mayor Liccardo said he would like San Jose to expand the program with private funds in the future. In addition, he wants to work with organizations like the Silicon Valley Leadership Group to explore the possibility of putting together a list of ADU manufacturers that will offer all-inclusive packages. The goal is to “rapidly scale” development, he said.

City Council Member Sylvia Arenas said her parents rent out their garage to bring in extra income. She added that she really hopes her fellow Council Members will support the mayor’s initiative.

Intempus Property Management has been San Jose’s leading property management firm for well over a decade. We cater to happy clients in Santa Clara County and throughout the greater San Francisco Bay Area. Our real estate and property management services consistently get five star reviews from our clients. So, whether you’re looking to buy, sell, or rent a property, contact us. One of our team members will be happy to talk with you and answer any questions you have.